A RAVISHMENT OF MACABRE BEAUTY

A dedicated sale of “Couture Jewelry: The Personal Archive of Shaun Leane” conducted earlier this month by Sotheby’s, in association with London-based vintage fashion auctioneer Kerry Taylor, fetched a higher than estimated total of over $2.6M. That robust figure attests to the excitement of private collectors and institutions to acquire pieces heretofore confined to runway shows and retrospective installations at the Met and the Victoria & Albert Museum.

Representing a decisively uncommercial segment of Mr. Leane’s canon, the forty-two pieces were custom created in collaboration with and for the beloved and late Lee McQueen’s Alexander McQueen and Givenchy collections, Isabella Blow, Kate Moss, and Sarah Jessica Parker, thus possessing invaluable iconic and historic virtues. Sotheby’s Luxury Division senior vice president and sales director Frank Everett described the collection’s uncommon distinction of being not really jewelry, nor fashion, nor contemporary art, and yet truly all those simultaneously. What does bind them together is a seductively dark, Gothic romanticism. The Coiled Corset (from “The Overlook” Autumn/Winter 1999 Alexander McQueen Collection, signed by both Misters McQueen and Leane), launched the auction through a 5-minute bidding frenzy. The Skeleton Corset (“Untitled” Spring/Summer 1999 Collection), last seen at Madonna’s Re-Invention Tour video and photography shoots by Steven Klein and Craig McDean, doubled its high estimate at the drop of the hammer. The white gold chainmail Contra Mundum glove encrusted with 4,290 diamonds reportedly took seventeen craftsmen and four years to create for Daphne Guinness. It was unveiled in 2011 at a private party by Jay Jopling with Ms. Guinness swathed in muslin and lying on a Perspex box as though in wake while guests like Tom Ford and Peter Dundas paid their respects. Other notable pieces were the Porcupine Quill Earrings, the Pheasant Claw and Tahitian Pearl collar (“What a Merry Go-Round” Collection Autumn/Winter 2001), and the recently rediscovered Silver Joan Headdress (Joan Autumn/Winter 1998 Collection) of cascading electro-formed silver rose briars and strings of blood red faceted garnets. 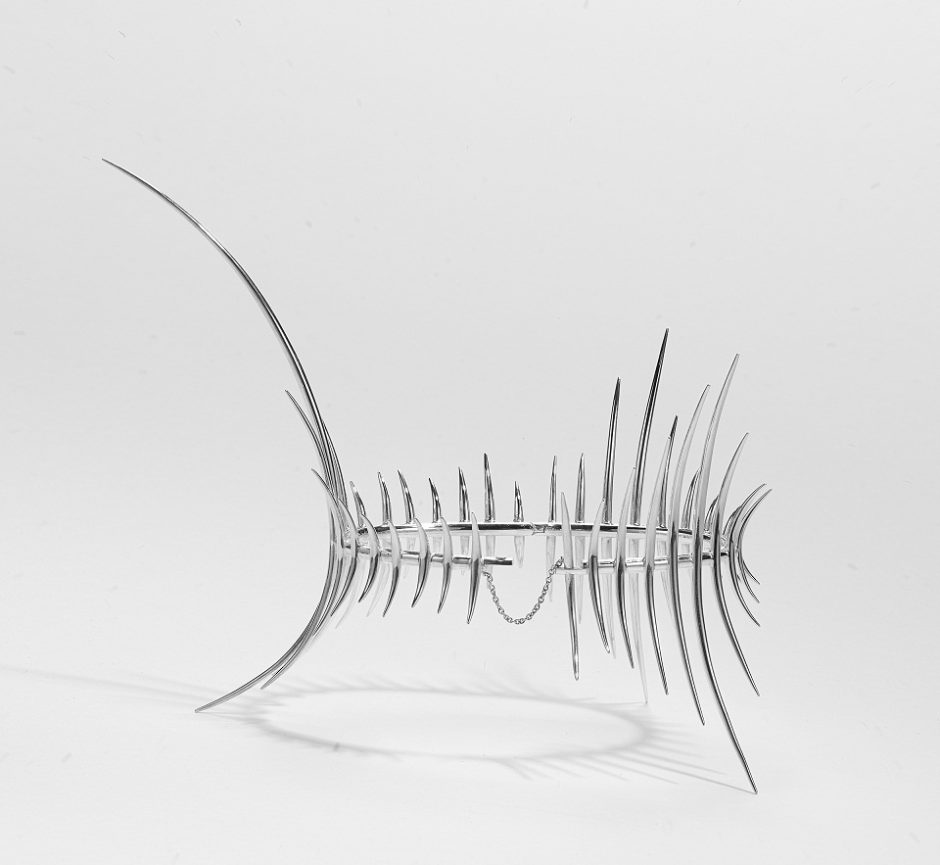 According to Mr. Leane, the decision to divest himself of these pieces stem from a hope they will inspire and challenge nascent designers in a similar manner that his friendship with Mr. McQueen prompted him to extend his reach into silversmithing, blacksmithing, pearl stringing, even taxidermy. In the 1990s, Mr. Leane earned his credentials toiling in the jewelry making traditions of Hatton Garden where Mr. McQueen first approached him to create Victorian-style silver fob chains. When Mr. Leane witnessed his creations on the runway not attached to watches rather draped around the body in unexpected ways, he realized the limitless potential of his own craft. With mounting demand, Mr. Leane eventually opened his own workshop in Mayfair to design under his own name for department stores and private clients.