VAUGHAN LIGHTS UP WATTS OF LOVE WITH MADE IN THE SHADE

Vaughan, the leading decorative lighting brand, teams up with international nonprofit Watts of Love for what may be described asa chiaroscuro of a collaboration: “Made in the Shade”.Throughout November,commemorative lampshades, designed by fifteen prominent designers across North America, will be showcased in a silent auction benefitting the Watts of Love initiatives of bringing life-saving solar lighting and lasting, sustainable energy solutions to impoverished communities worldwide. The exclusively crafted pieces flawlessly bring together functionality and design with each designer’s specific aesthetic expressed through a Vaughan lamp base of their choice.

Andrew Flesher used the smooth, white Aswan base as a canvas over which to mount an ornamental patchwork of Fortuny fabrics. Joanna Gick (of J&J Design Group) selected theEvry Tripod for her A-line shade embellished with painterly leaves. Philip Mitchell evinced sophisticated symmetry by juxtaposing the Bolzano’s rustic aspects with a contemporary embroidered linen shade. Sasha Bikoff went with the Lutry Rock Crystal Ball to conjure up a statement shade of wondrous whimsy and European classicism adorned with hydrangeas and zebras. William McLure mirrored the Zaragoza’s form and color with a shade of abstract ink blots to create a cohesively modern objet. Ginger Baker depicted both her love for horses and the panoramic Texan outdoors via the Truro Twig floor lamp and a shade with charming animal designs. Shelley Johnstone matched the Lotus Leaf base with a paper shade featuring Julie Lutjen Lawrence block prints in blue and cocoa, bordered by hand painted Greek patterns. Suzanne Tucker (of Tucker & Marks) incorporated a classic blue and white ceramic chinoiserie vase with a white-on-white paisley patterned shade, trimmed by Samuel & Sons and topped off by a blue semi-precious stone.

Vaughan founder Lucy Vaughan and daughter Emma also contributed to the project by pairing their own Milas fabric with the Pembroke base. Other participating designers include Cathy Kincaid, Massucco Warner Miller, Michael Smith, Griffin Design Source, Kristin Paton, Leta Austin Foster, and Tracy Morris. Vaughan, with showrooms in London and New York, has been providing the finest in decorative lighting, furniture, and home accessories, all manufactured, assembled and finished in Britain since 1983. For this worthy campaign, the brand has additionally committed to donating $1 to Watts of Love for every social media post that uses the campaign’s hashtags #vaughanXwattsoflove and #madeintheshade.

BY APPOINTMENT AT ARTIOLI 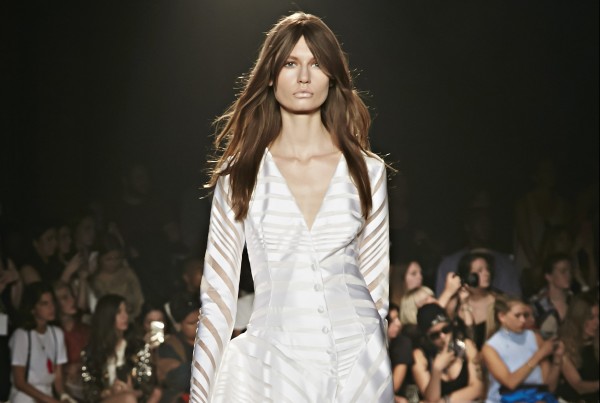