THE TROUBLED GENIUS OF CHARLES JAMES

“Charles James: Portrait of an Unreasonable Man – Fame, Fashion, Art” by Michèle Gerber Klein (with foreword by Harold Koda) presents a riveting look at the infamous designer whose legacy has been informing fashion for decades. At a recent stop of her book tour, the author gave the rapt audience at the National Arts Club a glimpse into the world of his undeniable genius. Drawing from an exhaustive research on Mr. James along with forty hours of archival interviews filmed (by mutual friends R. Couri Hay and Anton Perish) shortly before the designer’s passing, Ms. Klein offers a captivating and candidly searing examination of a complex and exceptional man. Of course, Ms. Klein has more than the necessary bona fides to write this book. If anything, there’s even a kind of symmetry in understanding Mr. James through the lens of a strong, accomplished woman.

Arguably, the most tragic part of the tale of Charles Wilson Brega James (1906-1978) is having been diminished as mostly an admired and respected memory and even then among only the most devout of the fashion faithful. And the why of it – under the sharp glare of his iconic works – is what makes Mr. James such a fascinating subject. His facility for shaping garments of architectural integrity and poetic grace was unparalleled. In his early twenties, shortly after his arrival in Manhattan, he unveiled a wrap dress with a zipper that coiled from neckline to hip. His acknowledged first masterpiece is the 1937 white Eiderdown jacket now on display at the Victoria & Albert Museum. In 1948, Vogue featured some of his most technically complex dresses with swirling folds and precise inner constructions.

But widely acclaimed as he was, Mr. James couldn’t sustain a viable business. By now, everyone is familiar with his lifelong habits of subsisting mainly on generous patrons, obsessively fine tuning his garments with no end in sight, and accumulating debts.  He was an intellectual, a gossip, and a snob. He was litigious, prone to protracted and preachy monologues, and very easily triggered. That Ms. Klein had chosen to describe him as “unreasonable” may be qualified as an understatement but she succeeds in rendering am even-handed and dimensional portrait of the designer. In 256 pages, above all the boldface type names, the intrigues and squabbles, Mr. James’ Abstract ballgown and Pagoda suit still loom large. And in the end, it will be the designs of Charles James that will forever be remembered.

FUNKSHION CELEBRATED ITS LATEST PLATFORM - THE FUTURE POWERED BY MINI 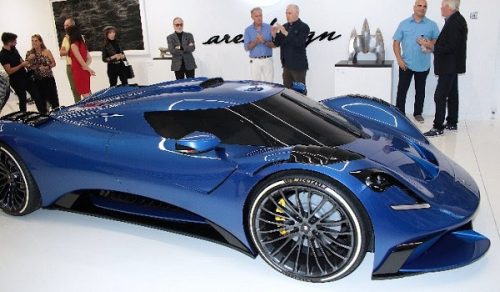