Rare is the beauty of a Maison Van Cleef & Arpels piece that sparkles like a mesmerizing kaleidoscope. And everyone is all the richer for it. In the brand’s latest creative masterwork, L’arche de Noé racontée par Van Cleef & Arpels (showing now at 547 W 26th Street through Nov 19), famed Pulitzer-prize winning set designer Robert Wilson has produced a menagerie of jeweled clips in pairs of animal designs so scintillating they render a description like “ravissant” somehow in adequate.Viewers walk into Mr. Wilson’s immersive stage set where they are able to scrutinize each pair of animal clip encased behind individual glass displays while light, music, and sound intermittently envelope them in thunderclaps and the roar of an encroaching ocean. Overhead, the frame of a miniature ark is suspended to suggest the distant sanctuary towards which these precious animals are headed. Though this far more intimate scope appears like a departure from the grand tableaux to which Mr. Wilson is accustomed, he meets the challenge of not only designing miniature treasures but placing them in a dazzling mise-en-scene worthy of his own oeuvre.

Here are kangourous of diamond studded gold in mid leap. There, onyx pingouins with diamond fringes are cuddled on an ice floe of coral cabochons. Yonder,one spies fluttering libellules, grazing zèbres, wizened hiboux, and a wide assortment of sixty wondrous beasts. Van Cleef & Arpels president and CEO Nicolas Bos reveals that the 1613 oil painting”The Entry of the Animals into Noah’s Ark”by Flemish artist Jan Brueghel the Elder was the initial source inspiration. But with legends of a great flood common across ancient civilizations, many other art pieces eventually became part of the “mood board” including miniatures from Turkey, a Bartolo di Fredi fresco, and Marc Chagall’s “Noah’s Ark”.

Founded in 1906 by brothers-in-law Alfred Van Cleef and Charles Arpels, Maison Van Cleef et Arpels opened first its doors at Place Vendôme and his since been favored by royalty, heiresses, film and stage stars. While it has a long history of designs inspired by nature, it has equally been progressive in crafting innovative pieces including the minaudière and the Mains d’Or ™. L’arche de Noé racontée par Van Cleef & Arpels installation debuted in Paris last year, has moved to Hong Kong, and is here now before the ark sets sails for a new destination.

L’ÉCOLE, SCHOOL OF JEWELRY ARTS – INSIDE A GLITTERING WORLD OF GEMS 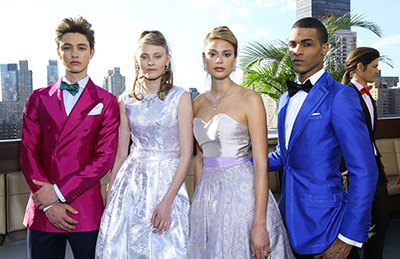