More than 140 Artists and Artisans from Across the Country

Free and open to the public, with free parking in the Mizner Park parking garages, the festival is the longest-running and most prestigious juried Art Festival in Boca Raton.

More than 140 artists and artisans from around the country have been selected to showcase and sell their artwork.

This year’s Festival is expanded and enhanced like never before since it happens during the blockbuster world premiere of the global tour exhibition Machu Picchu and the Golden Empires of Peru. This event is the only Art Festival permitted to occupy the entire breadth and scope of Mizner Park. 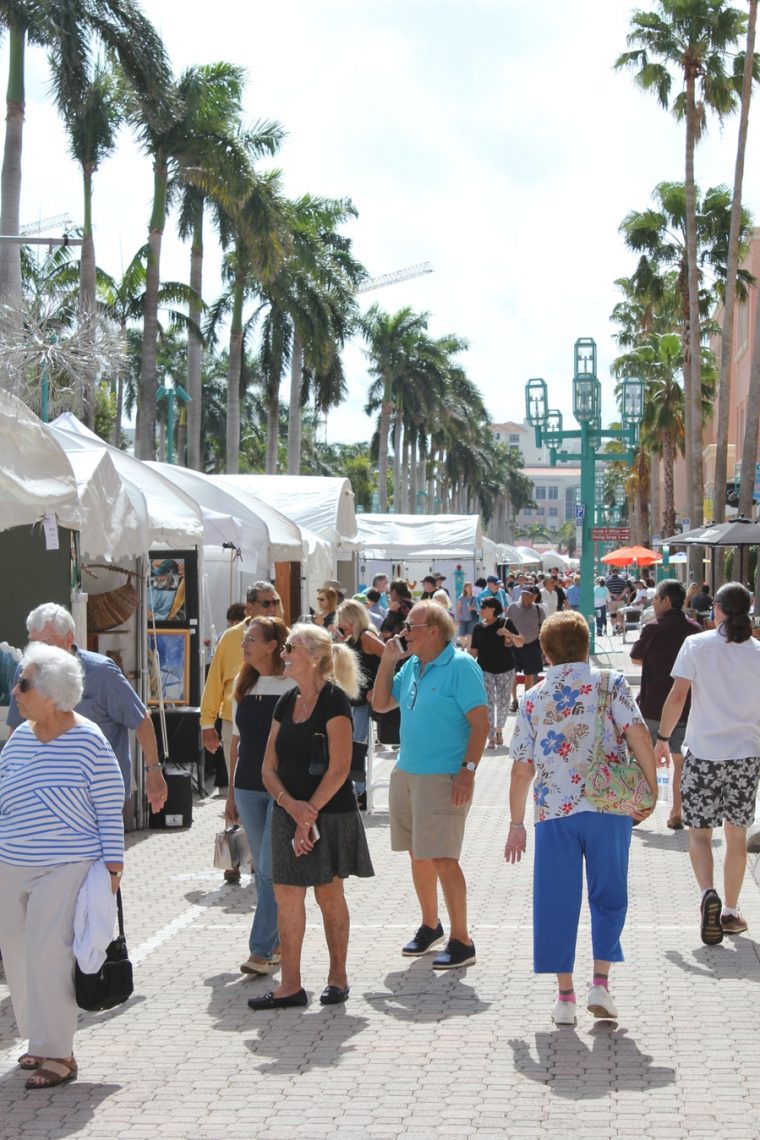 Festivalgoers will be able to purchase discounted Annual Membership Packages (at special reduced rates that will include free tickets to see the Machu Picchu exhibition along with the rest of the annual perks with each purchased Membership Package).

The discounted membership packages will also include free admission beginning with the next spectacular exhibition coming to the Museum in April 2022, Art of the Hollywood Backdrop.

On Saturday, the Museum’s official Family Day features “The Great Create,” where families can work on art-making projects together, based on the ancient artifacts in the Machu Picchu exhibition.

Over the weekend, there will also be free musical concerts and dance performances and food and beverages for purchase from some of the region’s leading Peruvian restaurants.

The event attracts more than 40,000 art collectors and enthusiasts to the Museum’s doorstep every year. The public can purchase fine artworks in a diversity of mediums including ceramics, wood, fiber, glass, drawing, painting, jewelry, photography, and sculpture.

The Boca Raton Art Museum is also kicking off the New Year with an impressive lineup of major events, including internationally acclaimed celebrity speakers — great for interviews.

The Museum is producing these events to celebrate the world premiere exhibition Machu Picchu and the Golden Empires of Peru, which kicked off its world tour in South Florida.

On view here through March 6, the Machu Picchu exhibition’s world tour goes next to multiple cities in Europe and Asia and won’t return to the United States until 2024.

The Boca Raton Art Museum is also kicking off the New Year with an impressive lineup of major events, including internationally acclaimed celebrity speakers.

Tickets cost $10 for Museum members, $20 for non-members, and free for students with a student I.D

Participants will spend the day learning and exploring Andean culture, beginning at the Boca Raton Museum of Art with a walkthrough of the immersive exhibition Machu Picchu and the Golden Empires of Peru.

They will then proceed to FAU to a keynote lecture by Peruvian Archaeologist, Professor, and Author Dr. Henry Tantaleán where they will delve into the FAU-Smithsonian exhibition The Great Inka Road: Engineering an Empire, and continue with a second keynote lecture by Northwestern University Professor of Anthropology Dr. Mary Weismantel via live video discussing her newly published book “Playing with Things: Engaging the Moche Sex Pots.”

Participants will learn about Andean musical traditions with Dr. Candy Hurtado while enjoying a music and dance performance by Kuyayky. A panel of FAU scholars’ research on the greater Andean Region include Professor Valentina Martinez who will discuss the Manteño civilization of Coastal Ecuador, Dr. Michael J. Horswell will speak about Ancient Andes in Colonial Spanish literature, Dr. Rachel Corr will explore the Andean roots of 20th Century Salasacan Culture, and Dr. Mike Harris will examine contemporary Manabi Culture.

A Conversation with Werner Herzog and Jose Koechlin and the Screening of Aguirre, the Wrath of God

A special night to celebrate the 50th anniversary of the 1972 epic historical drama film produced, written and directed by visionary Werner Herzog. Attendees not only watch the film, “Aguirre, the Wrath of God,” but they will join in a riveting discussion with Werner Herzog and the film’s co-producer, José Koechlin (who is also the CEO of Inkaterra Resorts and was one of the organizers of the Museum’s current exhibition Machu Picchu and the Golden Empires of Peru.

The famous film by Herzog documents the fictional journey of Don Lope de Aguirre, a ruthless Spanish conquistador, who vies for power while in Peru searching for El Dorado, the mythical empire of gold. Following the screening, the award-winning filmmaker shares tales of the extraordinary feats undertaken to create this film.

Both Herzog and Koechlin discuss the true adventures and unrepeatable cinematic achievements in the making of their films in the Peruvian Amazon. Working diligently to achieve their goals in film and sustainable tourism, they continue to portray the true character of Peru and the remarkable Machu Picchu.

The Museum has invited this celebrity chef for its annual fundraiser gala in February, a private event that has already sold out. (Available for press interviews before, during, and after he visits Boca Raton).

Chef Virgilio Martínez is world-renowned for his non-profit’s efforts to rescue and preserve Peru’s native and indigenous plants and seeds.

He studied and received his certifications at Le Cordon Bleu in Ottawa and London. During his formative years, he worked at well-known restaurants such as Lutèce (New York City); Can Fabes (Sant Celoni), and served as executive chef at Astrid & Gastón in Bogotá and Madrid.

Martínez is currently chef and owner of Central Restaurante, his flagship restaurant located in the Barranco District, Lima, Peru. In June 2012, he opened Senzo, a project in conjunction with Orient-Express Hotels, located in Palacio Nazarenas hotel in Cuzco.