A beautiful table was set. Guests began to arrive as the warm glow of a New York Spring twilight descended upon the commodious and well-appointed apartment of journalist and author Stephen Henderson and PR mogul husband James LaForce. The gathering was being hosted by the couple for Leadership for Educational Equity in support of an initiative assisting future front runners in political public service. Friends and associates are aware that cordial get together such as this occur here with some frequency, given Misters Henderson and LaForce’s proclivity for entertaining. But precise attribution should be given to the former’s lifelong penchant for cooking, which has developed into more than just an avocation he now describes as “gastrophilanthropy”.

Though Mr. Henderson is widely recognized for countless features on design and travel for The New York Times, New York Magazine, Elle Décor, Town & Country, and others, in recent years, he’s also been cooking and serving in soup kitchens all over the world. By his own accounting it all began when his mother conscripted him to kitchen duties at an early age. The youngest of five children, he welcomed the respite from being tormented by older siblings. But he also eventually found much to enjoy in cooking. The repetitive rhythm of preparing ingredients was soothing. There was creative satisfaction in turning out a delectable dish and a more deeply personal one in nourishing those he loved. This is why the notion of cooking or baking as work held no appeal, instead he chose to lavish his skills whipping up mess hall quantity dishes, hors d’oeuvres, and confections at home.

Eventually, he yearned to serve an even wider group and more to the point those who were truly in need. It was around 2010 when he was penning a travel story that he volunteered at a New Delhi gurdwara, which operates a 24/7 soup kitchen open to all religions, castes, classes, genders, and races, often serving over 20,000 hungry people a day. The experience prompted him to seek out similar benevolent groups and he’s since worked his way across the US and many other parts of the world, laboring over a stove or ladling food, carefully treading the culturally and socially sensitive aspects of charity work within varying institutional frameworks. He is even a weekly volunteer at the Holy Apostles soup kitchen on Ninth Avenue.

And if that weren’t enough, he and Mr. LaForce are active patrons for several other causes. Just last month, Mr. Henderson participated in his seventh Design on a Dime, the annual Housing Works fundraiser for AIDS-related assistance and advocacy. No, he is decidedly not an interior designer. But as an authority on the subject he is routinely invited to showcase a collection of home décor objets he amasses from being a flea market and thrift store connoisseur. He is quick to admit his taste leans heavily on what he calls the “cheerfully strange” from garishly colored oddities to religious iconographies. It’s no surprise most of his finds originate in Mexico where he delights in chancing upon anything that references El Día de los Muertos. Soon, his many exploits will be the subject of a book he is currently completing – part memoir, part disquisitions on gastrophilanthropy (some of which have appeared in earlier rough drafts online at http://cookingforothers.com/) and served with a soupçon of travel and a liberal dash of style.

Previous Maroon 5 - Girls Like You Video ft. Cardi B 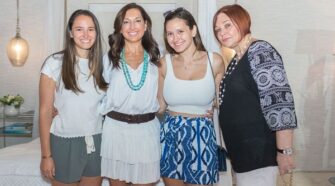