NEW YORK, 18 September 2020 – Sotheby’s is pleased to announce that the collection of Ezra and Cecile Zilkha will be offered in a dedicated, single-owner auction to take place at Sotheby’s New York on 21 November. The auction will feature furniture, décor, objets d’art, sculpture, ceramics, paintings, and more from the Zilkhas’ immaculate Fifth Avenue home, meticulously styled in the fashion of an 18th century French hôtel particulier. Comprising Old Master paintings, Impressionist & Modern art, 19th century European paintings, Asian and Meissen ceramics, exquisite examples of French furniture by leading artists from the Louis XV and Louis XVI eras, and much more, the Zilkha collection is one of the finest examples—and one of the last of its kind—to fully embody the grandeur of classical French and Continental style at such an impressive and detailed scale.

The exhibition of the full Zilkha collection will be on view at Sotheby’s New York alongside works from our marquee sales of Contemporary Art and Impressionist & Modern Art in November, with further highlights on view starting 18 September to coincide with Sotheby’s Asia Week auctions in New York.

Benjamin Doller, Sotheby’s Chairman, Americas, commented: “The Zilkha collection is a testament to the couple’s incomparable vision in curating one of the finest salons in all of New York, and showcases their deep understanding of art history. For decades, the Zilkhas hosted luminaries from international politics, the arts, media, and finance, and their home was a meeting place at the pinnacle of society. Exuding timeless elegance, their collection was more than a stage for these gatherings, but a reflection of their own personalities, passion for collecting, and exquisite taste—and it could hardly be replicated again.”

George Wachter, Sotheby’s Chairman, Americas, and Co-Worldwide Head of Old Master Paintings, remarked: “I had the pleasure of knowing the Zilkhas for many years, and walking into their Fifth Avenue home, seeing the flying buttress of Temple Emanuel next door from the windows in their entryway, you were immediately transported to a different time and place—one that embodied the grace and refinement of France in the 18th century. With a conviction to tradition, family and philanthropy, the Zilkhas led by example, and their collection and support of the arts perfectly captured that ethos.” 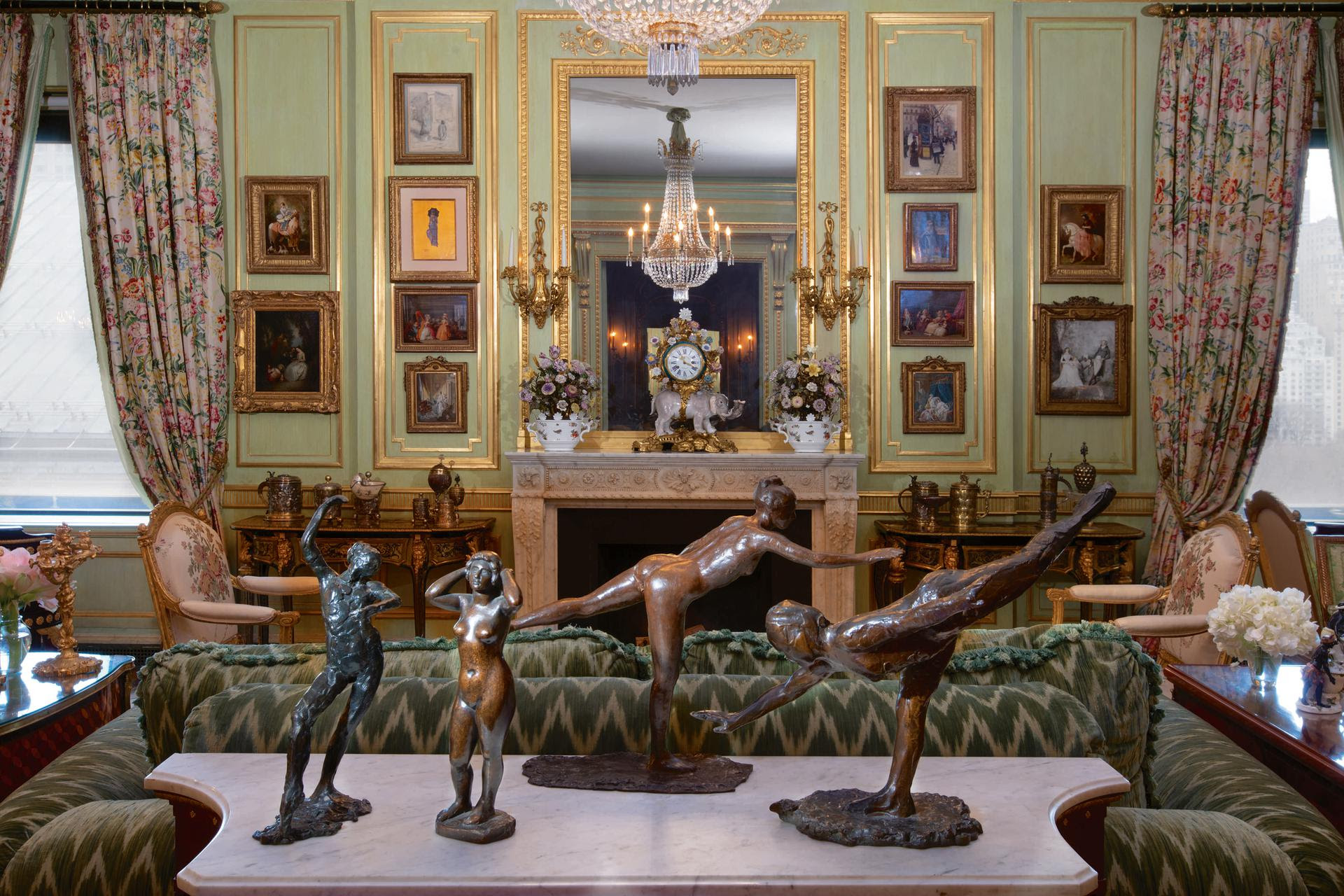 The collection of Ezra and Cecile Zilkha is distinguished by its deep roots in European art and decorative history, with a meticulous eye towards French and Continental fashions beginning with the 18th century, through Belle Époque France and into the 20th century. The treasure trove of fine and decorative art throughout the home defined the style of the Paris hôtel particulier and showcased the collection’s worldly sophistication and unqualified prestige. The Zilkhas’ former home on Fifth Avenue was a testament to this artfully curated vision, which was adorned with an array of art and objects that spoke to their passions as collectors, and eschewed trends for timelessness. Central to this aesthetic vision are several pieces spanning over a century of the golden age of French furniture design, with remarkable examples of signed pieces by leading artists from the Louis XV and Louis XVI eras including Roger Lacroix, Topino, Levasseur and Georges Jacob. Distinguishing the collection is a group of works by Louis XIV’s court cabinetmaker André-Charles Boulle, one of the most celebrated artists in the history of French and European design whose innovative forms decorated with rich marquetry and sculptural bronze mounts epitomize the incomparable grandeur and elegance of Versailles and the inimitable French creative spirit. Perhaps the most impressive Boulle work in the collection is the Régence Ormolu-Mounted Ebony And Boulle Marquetry Bureau Plat (above, estimate $500,000 – $1 million), a classic Boulle invention that once belonged to Louis XV and Madame de Pompadour’s chief minister Machault d’Arnouville, and more recently was in the collection of Jaime Ortiz Patino. The Zilkha collection further includes a Pair of Louis XIV Ormolu-Mounted Ebony and Boulle Marquetry Consoles (estimate $400/600,000), one of Boulle’s most popular models distinguished by its six legs, and a Matched Pair of Louis XIV Ormolu-Mounted Ebony and Boulle Marquetry Tables En Huche (estimate $200/400,000). The tables’ name, literally meaning “breadbins,” is due to their distinctive shape, the rarest of all Boulle’s furniture forms of which only five examples are known. 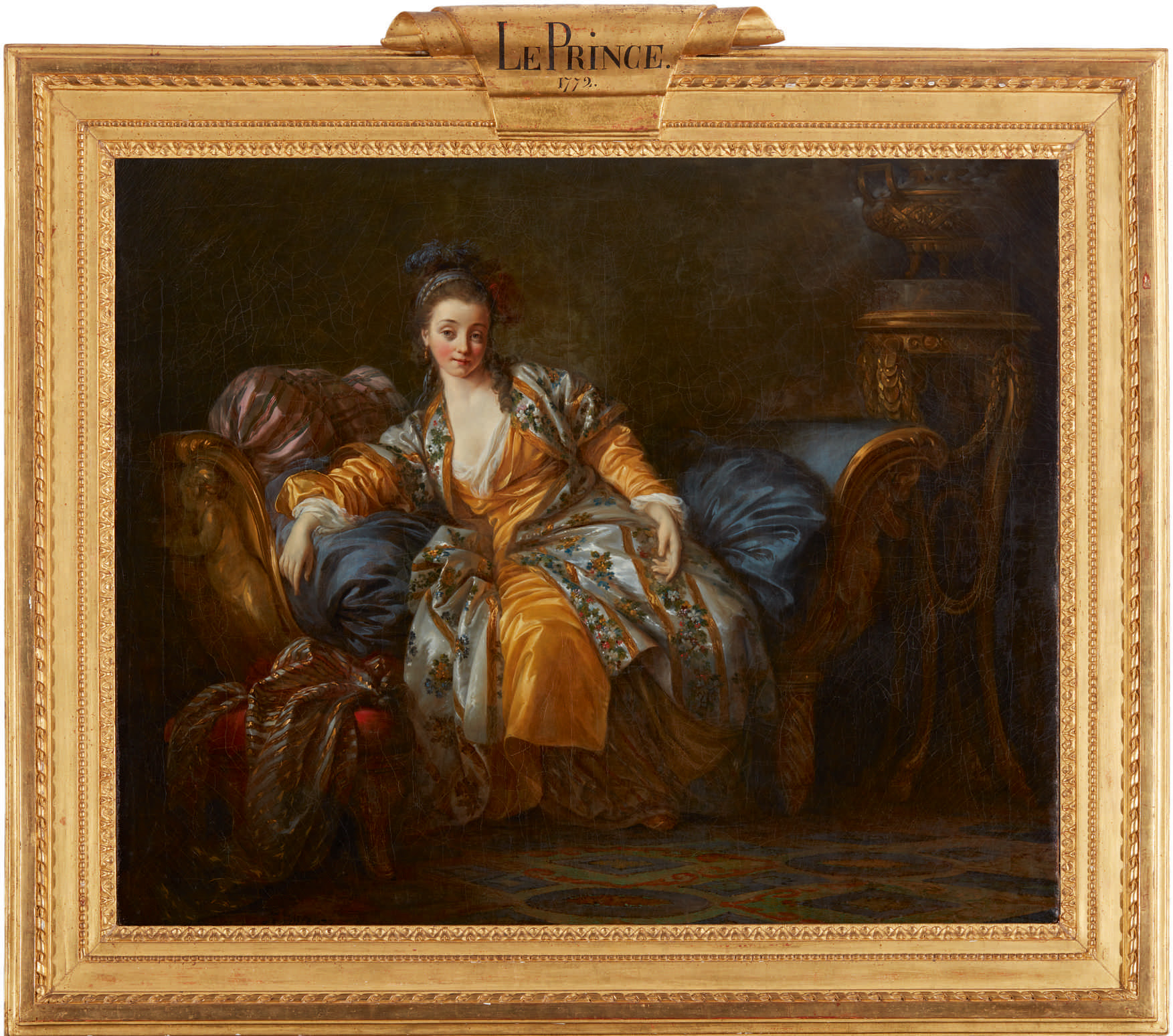 Leading the Zilkha collection’s array of Old Master paintings is Jean-Baptiste Le Prince’s Portrait of a Woman on a Divan (above, estimate $600/800,000). Signed and dated 1772, the exquisite painting is one of Le Prince’s finest and was first exhibited by the artist in the 1773 Paris Salon, alongside his L’amour à l’Espagnole, where its charm and beauty enthralled viewers. The painting depicts a beautiful young woman adorned in lush and rich Oriental fabrics reclining within a fanciful interior, inspired by the fashions and tastes of the early 1770s. The gondola-like sofa is an invention of Le Prince, who, along with Joseph-Marie-Vien, was among one of the first artists to include this type of furniture in his works. The work was most likely acquired directly from the artist by the aristocratic connoisseur Baron de Besenval, whose famed collection was sold posthumously in Paris in 1795.

The collection features significant pieces of Impressionist & Modern art, including Edgar Degas’ Danse espagnole (estimate $150/250,000), a balletic sculpture capturing a dancer in motion. Degas’ exploration of graceful movement is a defining feature in his oeuvre, and nowhere is his exceptional aptitude for representing the human form in motion more evident than his sculptures. Out of the 74 sculptures Degas conceived, more than half of them depict dancers in a variety of poses, their bodies dramatically suspended in time. However, the present sculpture departs from Degas’ usual ballet motif. The dancer strikes a pose that suggests a hybrid of French ballet and Spanish dance. Auguste Rodin’s Le Baiser, 3ème reduction (estimate $200/300,000) is another exceptional sculpture from the collection. Originally intended for the left side of the Gates of Hell, Le Baiser is one of Rodin’s most highly regarded forms. Iconic for its combination of sensuality and tenderness, Le Baiser portrays a scene from Dante’s La Commedia, in which Francesca and Paolo are condemned to spending eternity in an embrace for committing adultery. The present version was cast during Rodin’s lifetime and last appeared at auction nearly 60 years ago.

Additionally, Cecile Zilkha’s collection of exquisite jewelry will feature in Sotheby’s Magnificent Jewels auction in December. Renowned for her timeless elegance and lifelong interest in the arts, Cecile approached jewelry with the same level of refinement and curation that she applied to her other acquisitions, seeking pieces of superlative quality across centuries of design. Her jewels were the perfect complement to her role as influential hostess to both high society and the intelligentsia, from the important Emerald and Diamond Stomacher Brooch (right, estimate $200/300,000) made in 1840 as a wedding gift for Lady Frances Vane, wife of John Winston, 7th Duke of Marlborough and the 19th-century Silver-Topped Gold, Sapphire and Diamond Brooch (estimate $200/300,000), to a stunning 1930s Diamond Rivière by Bulgari (estimate $300/500,000) and a mid-20th-century Emerald and Diamond Flower Clip-brooch by Van Cleef & Arpels (estimate $80/120,000) centering a sumptuous 85-carat emerald.

Mrs. Zilkha’s affection for colored gemstones is demonstrated in a considerable array of emerald, ruby and sapphire pieces, most notably an exceptional 21.86-carat Emerald and Diamond Ring by Cartier (above, estimate $750,000/1 million). Her confidence as a collector, however, is perhaps best represented by the striking flourishes found in jewels of high design including a Pair of Emerald and Diamond Earclips by Bulgari (estimate $350/550,000) with opposing emerald and diamond drops, a beautifully-constructed Ruby and Diamond Twist Bracelet by Harry Winston (estimate $175/275,000) and a heavenly Cartier Feather Brooch (estimate $60,000-80,000).

Further highlights from the Zilkha collection will be offered throughout Sotheby’s marquee fall auctions for Impressionist & Modern Art and American Art, including Émile Bernard’s Les Gauleuses de Pommes (estimate $500/700,000) and two exquisite bronzes by Edgar Degas: Grande arabesque, deuxième temps (estimate $400/600,000) and Grande arabesque, troisième temps (estimate $500/700,000). Les Gauleuses de pommes represents the culmination of Bernard’s experimentations with form, color and subject matter, and illustrates the important impact his work had on the evolution of Post-Impressionist styles. Capturing peasant life with a spiritual purity, the composition is inspired by Medieval tapestries, with sinuous Gothic lines forming a frieze-like arrangement, and represents Bernard at the height of his Symbolist style. The Degas works further showcase the artist’s constant experimentation with rendering the form of the dancer in various poses, focusing on the grace and beauty of these figures in motion. The present works capture a dancer in the position known as an arabesque, one of the most animated poses of the ballet, and was commonly depicted in Degas’ paintings, drawings and pastels, in addition to several sculptural renderings.

Additionally, Milton Avery’s Mender (estimate $800,000 – $1.2 million) will star in Sotheby’s marquee American Art auction this fall. Painted in 1960, Mender exemplifies Milton Avery’s mature interest in simplified compositional designs unified by form, color and surface. In Mender, Avery rejects all extraneous details or embellishments and leaves the realm of purely realistic representation to distill the abstract qualities he saw as inherently present in the forms and figures of the world around him. The painting was acquired by the Zilkhas from Avery’s primary dealer, Grace Borgenicht Gallery, in 1961, the year after it was painted, and it has remained in their private collection since.

Ezra Zilkha was a scion of the illustrious Babylonian Jewish family, whose personal history traces to the era of the Chaldean Dynasty, and whose scions—most notably Nebuchadnezzar II—conquered Jerusalem some six centuries before Christ. The family pioneered international banking in the 20th century and Ezra’s father Khedouri Zilkha founded K.A. Zilkha, Maison de Banque, commonly known as Banque Zilkha. Ezra met his wife Cecile while attending a wedding at the Plaza Hotel in 1949, and the couple married the following year in February 1950. As Ezra established operations for his family’s banking business in New York and oversaw the global financial interests of the Zilkha family, Ezra and Cecile traveled extensively and formed close friendships with international social, political and cultural figures, including Ronald Reagan, Anwar Sadat, David Rockefeller, Henry Kissinger, Margaret Thatcher, Jacques Chirac, Barbara Walters, Boutros Boutros-Ghali, and many others. A chronicle of their journeys can be found in Ezra’s personal memoir, From Baghdad to Boardrooms.

With Ezra, Cecile committed herself to a lifetime of philanthropy in support of education, the arts, and the disabled, and as benefactors they left an indelible impact on an impressive portfolio of charitable causes. Cecile focused her attention on The Hospital for Special Surgery and The Metropolitan Opera, where she served as a member of the Board of Trustees and its Vice Chairman. Later, she would be key to reviving the Metropolitan Opera, and through her significant fundraising efforts established “On Stage at the Met,” which continues to promote the institution’s efforts. Her accomplishments were honored by the Republic of France and in 2005 she was awarded Chevalier de la Legion d’Honneur and a Chevalier des Arts et des Lettres.