Champagne Pommery raised a glass to “Het Spel (My neotonic ovoid contribution to Modernism)” the first ever Pommery Prize winning piece by conceptual artist Ryan Gander at the Armory Show. According to Mr. Gander, his swirling composition of artificial fur balls set upon a white plinth (at the Champagne Lounge section) is a playful reimagining of George Vantongerloo’s more structured 1918 piece “Komposition Aus Dem Ovoid (Composition from the ovoid)” and suggests “impossible, immeasurable opportunity”. The accolade, bestowed by Vranken-Pommery Monopole’s Nathalie Vranken, comes with a $20,000 sponsorship shared between the artist and the Lisson Gallery along with the opportunity for Mr. Gander to show a new piece at the Champagne Pommery estate in Reims later this year.

Initially founded as a wool trading concern in 1858 by Alexandre Pommery (1811-1858) and Narcisse Greno (1810-1892), Champagne Pommery evolved into the renowned brand it is today under the stewardship of Alexandre’s widow Louise Pommery (1819-1890). It was at her behest that champagne, a once humble, sweet dessert wine, should assume a dry, crisp flavor to be enjoyed at any time. This inexorably led to the popularity of the brut category, which currently accounts for some 85% of champagne consumption worldwide. Mme Pommery’s visionary spirit was equally evident in a love for modern art: adorning the 18-kilometre cellars of Champagne Pommery with Gustave Navlet’s bas relief sculptures, and commissioning a sculpted cask from Émile Gallé. Since acquiring the house, Mme. Vranken, herself an art connoisseur and patron, has admirably continued its commitment to innovation and the arts while honoring Mme. Pommery’s legacy with initiatives such as its Expériences Pommery artists’ showcase and collaborations with the Armory Show.

Now on its 25th year, the Armory Show has always been something of a locus where the international art cognoscenti keep creativity and commerce in perpetual churn. The pieces and original commissions on show draw curators and avid collectors from around the world into a shared communion, prompting discourses on the role of art in society, its current state, and perhaps more pointedly where it’s headed next. Its Platform exhibition, dedicated to large-scale works, is curated by Queens Museum director Sally Tallant. And it was from among this year’s pieces – by artists Andreas Angelidakis, Siah Armajani, Tania Candiani, Iris Häussler, Xaviera Simmons, Jessica Stockholder, Super Taus, and Pascale Marthine Tayou – that the Pommery Prize was selected by a jury of curators and collectors, which included Sandra Hegedüs of SAM Art Projects; and Marie Griffay, FRAC Champagne-Ardenne director.

Previous Cia. Maritima hosts brunch and pop up at No3 Social in Wynwood

How to Host an Elegant Dinner Party 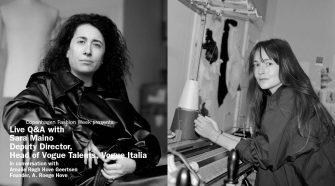