Round One Of The USPA Gold Cup® Wraps Up

Wellington, FL – The final four teams played their opening game of the 2019 USPA Gold Cup® on Sunday at the International Polo Club Palm Beach with Aspen defeating La Indiana 11-9, while spectators on the U.S. Polo Assn. Field 1, were treated to an exciting match resulting in a 14-12 victory for Tonkawa over Park Place.

The feature game of the week provided a thrilling finish after Tonkawa built a large lead, only to see Park Place fight their way back in the final chukker. Led by a seven-goal performance from Sapo Caset, Tonkawa used efficient shooting throughout the game, while Park Place struggled to convert their opportunities, making just 2 of their 7 shots over the first four chukkers. Tonkawa generated a consistent attack in part due to their accurate passing that kept the possession in their favour. Nico Pieres almost single-handedly brought Park Place back into the game with five goals over the final two chukkers, but their inaccuracy early in the game ultimately led to the defeat.

The game began at a slow pace due to six fouls in the first chukker against Park Place. Provided with the opportunities from the penalty line, Caset took advantage for Tonkawa, shooting a perfect 3 for 3 and giving Tonkawa the 4-0 lead. Park Place quickly re-organized and pressured the Tonkawa defence to receive three penalty attempts of their own in the following chukker, but two missed penalty 3’s prevented them from closing the deficit.

The high-scoring chukker saw both teams score three goals in back and forth action, as Tonkawa maintained their lead thanks to an accurate attack. The third chukker saw Caset and Sterling Giannico connect on multiple occasions, resulting in two field goals for Caset and two assists for Giannico, extending Tonkawa’s lead to five with a 9-4 score at halftime.

Conceding nine goals in the first half, Park Place needed to slow down the potent Tonkawa offense, but all four players in green were contributing and causing difficulties for their opponent. After claiming two assists in the previous chukker, Giannico scored two goals of his own, leaving Park Place desperate for offense if they were to mount a comeback. Park Place’s Nico Pieres took control of the game in a dominant fifth chukker, scoring three straight goals to quickly cut the deficit in half. Firing six shots at goal, Pieres was relentless in his pursuit to bring Park Place back into the game.

Andrey Borodin scored his first goal of the game at a crucial time to begin the sixth chukker, placing added pressure on Tonkawa has their lead continued to shrink. Pieres stepped back into the spotlight, scoring two quick goals to complete the comeback and tie the game at 12-12 with just minutes remaining. Unfazed by the comeback, Tonkawa responded with two accurate finishes for back-to-back goals from Agustin Merlos and Caset, holding off Park Place and claim the 14-12 victory. 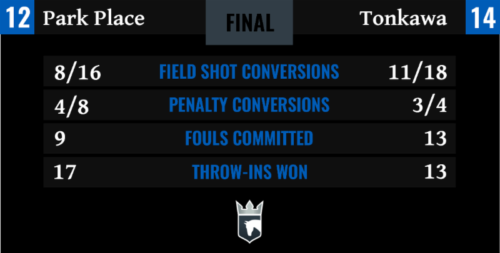 The first match of the day featured a controlled victory for Aspen as they never trailed after conceding the first goal of the game. A strong team effort from Aspen on both sides of the ball saw all four players contribute on the scoresheet, while holding La Indiana to 36% shooting from the field. After Jeff Hall opened the scoring, Aspen responded with three consecutive goals to end the first chukker. Lucas James and Polito Pieres ignited the Aspen attack throughout the first half, while Tomas Schwencke worked hard off the ball to pressure La Indiana. Held to just four shots, La Indiana found themselves trailing 7-4, unable to generate enough scoring opportunities to match Aspen.

The defining moment of the game was a fourth chukker resulting in Aspen doubling their lead from three to six, leaving La Indiana with a large deficit to overcome. After a quiet first half, Facundo Obregon came alive in the fifth chukker, scoring a goal and adding an assist to cut into the Aspen lead. Obregon added two more goals in the final chukker, but La Indiana were too far behind to get within reach, with Polito Pieres’ five goals leading Aspen to the 11-9 victory.

The International Polo Club Palm Beach (IPC) is the premier polo destination in the world, hosting the largest field of high-goal teams and the most prestigious polo tournaments in the United States. Polo enthusiasts descend upon Wellington, FL each winter season to enjoy their love of the sport at the most prominent polo facility in the country. The 2019 Palm Beach Polo Season opens Sunday, December 30, 2018 and concludes 17 weeks later with the U.S. Open Polo Championship® Final on April 21, 2019.

Polo matches are open to the public, with a wide range of hospitality and guest seating that includes elegant grandstand viewing, field tailgating, stadium seating, field-side champagne brunch at The Pavilion, and exclusive sponsor boxes. See more at www.internationalpoloclub.com.