Designer, Greg Lauren, nephew of Ralph Lauren featured his Spring/Summer 2016 menswear collection at New York Fashion Week Mens at Skylight Clarkson Sq on 550 Washington. Greg Lauren went all out with this collection by sending 62 looks down the runway!

The lineup was separated into color stories with white, beige and military green key in the color scheme. There were models dressed up as athletes, in suits, and even as fishermen, but each one was deconstructed to the Greg Lauren specification. Each chunk of fabric is unique, vintage, and hand-ripped. When seen close up, it is simple to notice how that original value keeps his customers wanting more.

New advancements this season contained extra-long shirts, apron jackets, and new custom-distressed shoes, bags, and hats. Towards the end of the show, Lauren presented the audience with a spin on evening wear: a three-piece suit made of disheveled vintage linen. He suggested men to wear this three-piece suit to summer beach weddings instead of formal and stuffy shirts and trousers.

Greg Lauren’s show was definitely one to remember from New York Fashion Week Mens. Even the guys who aren’t completely prepared for Lauren’s blanket coats and patchwork pants aren’t totally opposed to it either and could take a risk.

Next The Gucci Fall Winter 2015 Campaign

Interview With Diana LoMonaco CEO and Founder of Classic Six 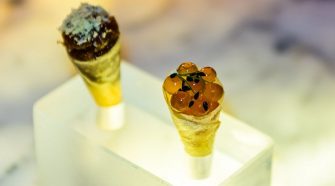 Best Father’s Day Menus and Things to Do in Miami