The Rookie of the Year title is awarded to a woman from the 2019 rookie class who embodies the brand and is exceptional in front of the camera and behind the camera. The Rookie is chosen based on a combination of popular vote, editor’s choice and an evaluation of proven history as an SI Swimsuit brand ambassador. The 2019 SI Swimsuit rookie class was a group of amazing women including Camille Kostek, Haley Kalil, Halima Aden, Jasmine Sanders, Kelsey Merritt, Olivia Brower, Tara Lynn and Winnie Harlow.

Jasmine Sanders, most commonly known as Golden Barbie, was born in Frankenthal, Germany and raised in Columbia, South Carolina. Sanders started her modeling career as a teenager, working with Seventeen, Free People, Nike, and ALDO shoes. She made a shift towards high fashion work by walking the runway for Miu Miu’s S/S 2016 show. Since, she has appeared in runway shows for designers including Moschino, Ralph Lauren, DKNY, Jeremy Scott, Julien MacDonald, Philip Plein and Vince Camuto. 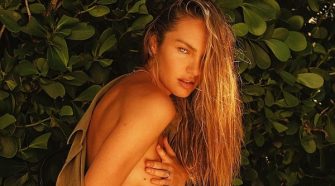