Payment plans are available and start as low as $26 + shipping

Read about it all in today’s Billboard feature here

With the festivals and over 300 club shows and events annually throughout Texas, DDP is the state’s biggest independent promoter.  Paired with this announcement is the official lineup for the 2022 NYE celebration taking place on December 29 and 30 at Dallas Market Hall.

The lineup features prominent names across a myriad of genres including Excision, John Summit, Porter Robinson (DJ Set), Svdden Death, Tchami, Zeds Dead and plenty more.  The Lights All Night 2022 pre-sale will be Monday, August 1 at 10 AM CT, sign up for the pre-sale and enter for a chance to win backstage passes and more at Lightsallnight.com. Payment Plans are available and start as low as $26 down + shipping.

Led by James “Disco” Donnie Estopinal, DDP has produced over 17,000 shows and sold over 17,000,000 tickets in over 100 different cities since its inception in 1994. Over twenty-five years ago, Disco Donnie discovered that Texas was a community with a …Texas-sized appetite for electronic music.

Since then, DDP made a commitment to bring the best electronic music to the state and has produced shows in Dallas, Houston, San Antonio, and Austin in addition to 11 other smaller cities in Texas.  In the last ten years, the company has generated over $1 billion dollars in total economic impact and over $1.6 million in charitable donations to local nonprofits throughout Texas.

In April of 2020, DDP took a calculated risk and produced Ubbi Dubbi, the “first festival back,” after over a year of COVID-canceled events. The team innovated COVID-safe protocols and third-party post-event research confirmed no escalation in COVID cases. DDP’s operations became a template for promoters nationwide.

Disco Donnie has long served as a mentor to new promoters and he has been a proponent of LAN since its inception. With this acquisition, Donnie is committed to maintaining the authenticity of LAN and enhancing it with DDP’s magic and expertise. Scott Osburn will remain as an advisor, continuing to focus on creating artist and fan-centric experiences.

Founded by Scott Osburn and Hank Keller, Lights All Night first launched on New Year’s Eve 2010 with headliner Ghostland Observatory and 6,000 fans. LAN has since grown to become Texas’ longest running electronic music festival, and one of the most visible NYE festivals in the U.S. Over the years, LAN headliners have included superstar artists Avicii, Calvin Harris, deadmau5, Marshmello, Skrillex, The Chainsmokers, Tiësto, and many more, while playing host to over 300,000 attendees and 500+ music acts from across the globe.

In 2018, Osburn acquired a majority interest in LAN and started operating the festival under his company Always On with direct responsibility for operations and event production, talent buying and marketing.

For the following two years, LAN sold out weeks in advance of the festival including 35,000+ attendees in 2019 and 36,000 in 2021. In addition to his advisory role at LAN, Osburn now looks forward to exploring new entrepreneurial opportunities with respect to entertainment, live events, and other industries.

“Selling Lights All Night to Disco Donnie Presents is a full circle moment. Throughout the years, Donnie, his President Michele Servais and the DDP team have been great mentors and friendly competitors. DDP wrote the playbook for Texas’ electronic music scene, and we have been able to create a first-class festival with their support. I’m very excited to see how the festival evolves and feel fortunate to hand over the reins to such respected and capable producers.” – Scott Osburn, CEO – Always On, LLC

“Acquiring Lights All Night is a watershed moment for Disco Donnie Presents. After re-establishing our own independence, I am thrilled to start a new phase of growth with our first acquisition. Over 25 years ago, I felt such a strong connection with the audience at our earliest shows in Texas and since then, the demand for dance music has exploded. Scott Osburn and his team have built an extraordinary festival and it’s an honor for us to be trusted to continue and expand on their creativity.” – Disco Donnie 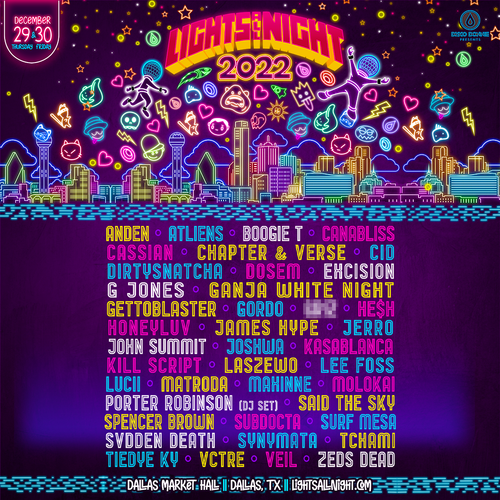 Since the company’s inception in 1994 DDP has sold over 17 million tickets producing over 17,000 live events, arena shows, and outdoor festivals in over 100 markets around the world including the U.S., Mexico, Puerto Rico, Canada, and Panama.

Annually DDP is responsible for organizing and promoting nearly 1000 club events across the U.S. ranging from Portland, Columbus, Houston, Tampa, New Orleans, Dallas, and St Louis to name a few.

He is also known for producing major festivals such as The Day After, Sun City Music Festival, and most recently Ubbi Dubbi, Sunset Music Festival, Ember Shores, Paradise Blue, Sunsoaked, and Freaky Deaky.

In 1999, Donnie first partnered with Pasquale Rotella, CEO of Insomniac Events. In 2008, the duo merged officially, setting their sights on strategically developing the Insomniac brand throughout the world and making Insomniac a household name.

Working together, the pair ushered in events such as EDC Orlando, Dallas, Puerto Rico, New York; Beyond Wonderland Seattle; Nocturnal Wonderland Austin, and co-founded Electric Forest. The partnership also produced hundreds of club shows annually in markets across the U.S.

In 2020, James “Disco Donnie” Estopinal announced that he re-acquired sole ownership of Disco Donnie Presents (DDP), the namesake company he founded 28 years ago. This historic acquisition concludes an epic ten-year journey through being the first company acquired by SFX, surviving SFX’s subsequent bankruptcy and becoming a part of LiveStyle.