DESIGN ON A DIME NYC 2018: CHARITY AND STYLE BEGINS AT HOME

New York’s laudable interior designers, well-heeled philanthropists, and home décor enthusiasts convened at the 2018 edition of Design on a Dime New York to raise much needed funds for Housing Works’ programs in advocacy and services for people living with and affected by AIDS. This year’s participating talents – including Glenn Ban, Branca, Aaron Rambo, Willey Design, Reddymade Architecture & Design, Phillip Thomas, Jae Joo, Saudah Saleem and others – conceived beguiling showcases of furniture, art and home décor, all of which were donated and made available at substantially reduced prices.

The easy joke is that Anthony Gianacakos hasn’t met a pattern he didn’t like, flippantly describing his aesthetic as “crazy town”. Yet clearly there is virtuosity in the kaleidoscopic Anthony George Home + Two Blu Ducks vignette he lavished with vivid colors and dynamic patterns that coalesced into a finely calibrated whole. Patrick James Hamilton, on the other hand, unfurled his vignette from a core inspiration – the Broadway musical iteration of the Giussepe Verdi opera “Aida”. Here was the exquisite flat in which the reincarnated Aida and Radames would dwell, amidst furnishings and décor pieces of modern refinement but with subtle, sand and sun-kissed intimations of ancient Egypt in the color palette. 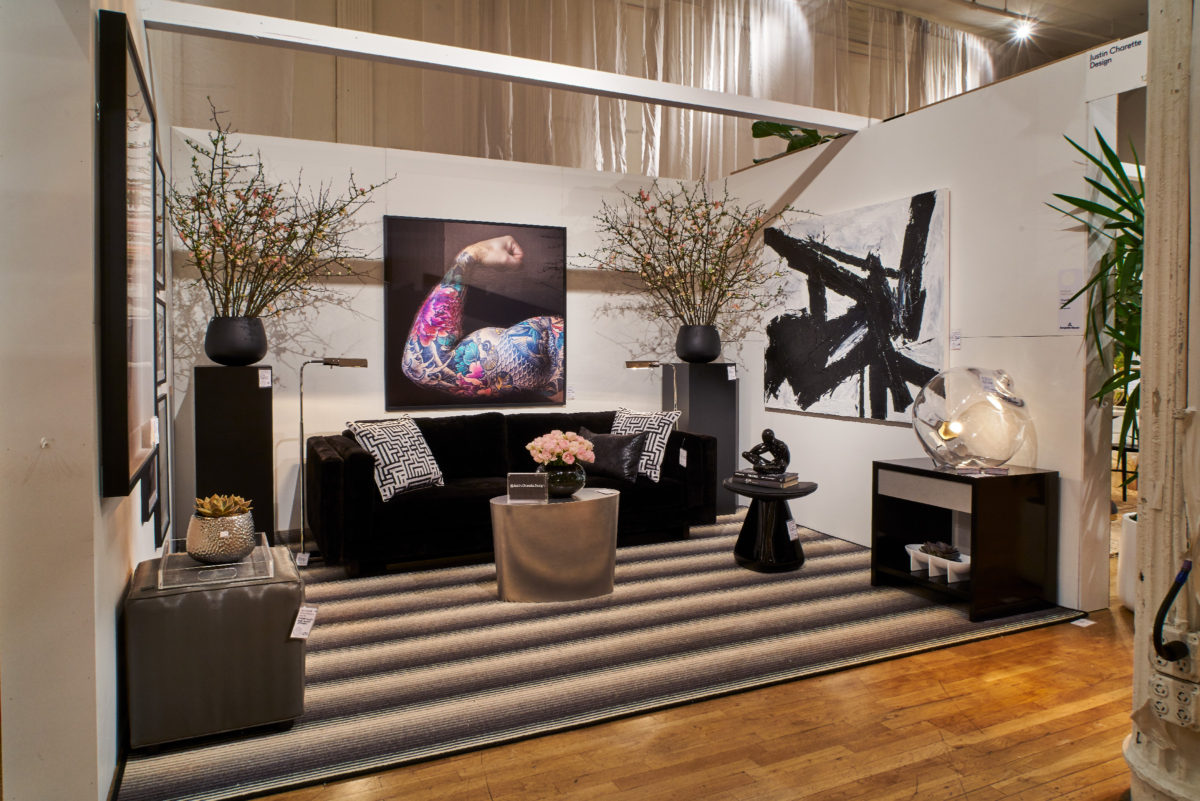 The brawny, confident masculinity of Justin Charette‘s rigorously considered selections for his vignette was apparent in subtext – from the broad strokes on the art and the grounding presence of the dark chocolate colored couch to the firm shapes of the vases and accents – as well as in plain text – a photograph of the designer’s “gun a-blazing” arm by Greg Salvatori. Miles Redd spun a circular motif for his space as revealed by the mirror, the chair backs, column pedestals, even in the grooves of the urns and the wall art. His propensity for punctiliously layering his work with so-called “high” and “low” details remains an unbeatable trademark.

Nick Voulgaris III (and his Kerber’s Farm concern) once again stuck close to his natural waterfront habitat. Though this time, he didn’t just design a deck but an entire charming seaside shack. And if Mr. Voulgaris knew anything it would be the joys of living on ocean front properties. He wrote an entire book on the subject. Peter Sandel, meanwhile, chose a landlocked Southwestern destination for his vignette replete with dessert plants, leather club chairs, wood plank rafters, and other rustic touches. And just before it became too on-the-nose, the narrative is prudently broken by a cool aqua colored couch with blue accent pillows.