DAVID HART AT THE CROSS SECTION OF THEN AND NOW

Nothing is more telling of fashion amateurs than their automatic dismissal of 1970s dressing as “cheesy” or “campy”. Certainly, there were some ill-conceived trends – but every decade has a quota of those. Is it even necessary to bring up that men’s rompers moment of 2017? The truth is – the 1970s was a liberating decade of experimentation in music, sex, women’s and gay rights, and yes fashion. At its best, fashion during the disco years was expressed in bursts of colors and patterns, silhouettes of a buoyant grace, and even an optimistic eye toward the future. Here is where David Hart’s latest collection begins and makes its inexorable way toward the social media age. 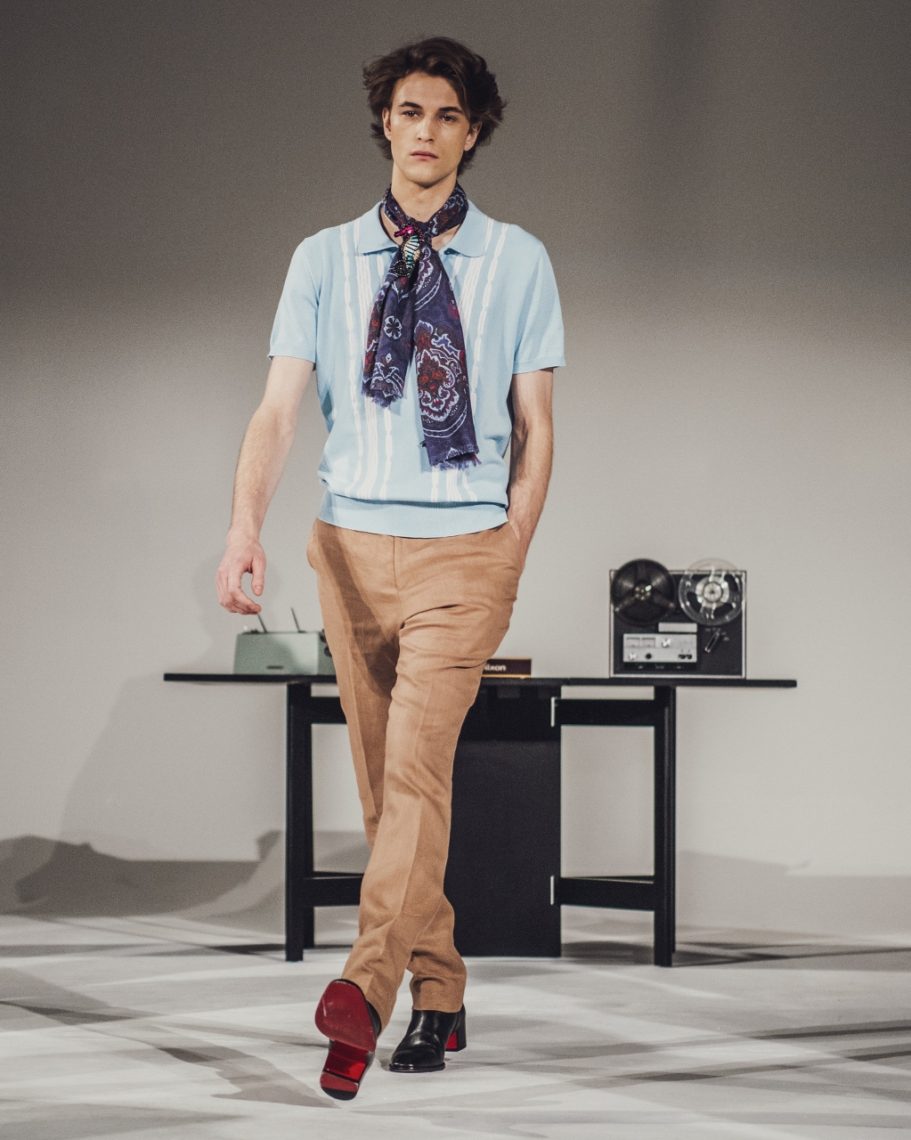 Nothing is more telling of fashion amateurs than cribbing from well-trodden looks. And Mr. Hart is no amateur – crafting a collection truly his own with suits, scarves, shirts, and shorts that carry an aesthetic relevance as potent then as they are now. Reflections of the past appear in the present as subtle intimations– the color palette was inspired by Florence Knoll’s legendary use of menswear suiting tweeds and flannels to upholster furniture. Then there are the not so subtle ones – Mr. Hart references the scandal fueled Nixon resignation of August 1974 as perhaps the wishful ideal outcome for history to repeat itself today. Time winds itself back and forth throughout this collection. Another instance is Mr. Hart’s use of fabrics by the Albini Group which has been, for some five generations now, manufacturing the finest material for major labels. Equally noteworthy are the encrusted handmade embroideries by the French artist Céleste Mogador whose pieces Mr. Hart utilizes as bow ties and other details for an in disputably modern finishing touch.

Previous Brazilian shopping event at What Goes Around Comes Around

25 Recordings Added To The GRAMMY Hall Of Fame®

Bring Your Most Intimate Dreams To Reality with DREAMGIRL Intimate Apparel