Worldwide luxury brands leader and event sponsor LVMH will be presenting Moet Hennessy’s new premium tequila brand, Volcan de Mi Tierra, alongside Moet Champagne and Belvedere Vodka for live patrons. The event will be hosted by Michelle Ciotti, whom many may recognize by her association with IHeartRadio. 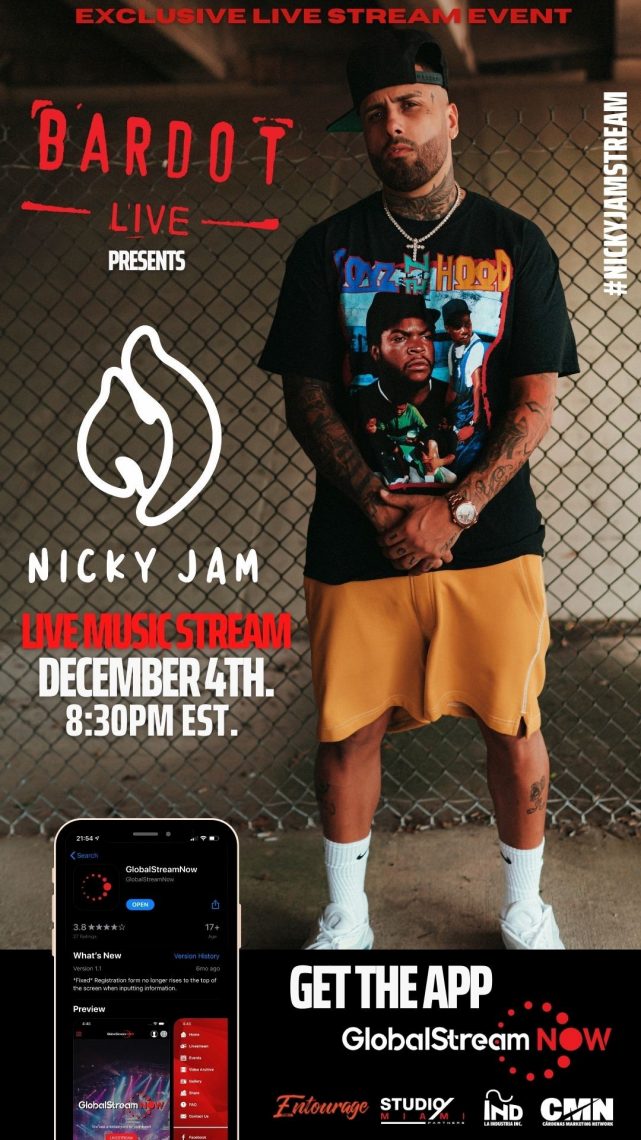 Headed by Yunexy Eloy and Maureen Kragt, Bardot Live is a next-generation entertainment venue that is leading the industry’s rapid evolution in 2020 by transforming how we can experience nightlife and live music by utilizing their complementary skill-sets together.

Kragt is known for her work directing marketing and communications for the Influencer Awards Monaco and Eloy possesses an extensive background in cloud-based technologies, architecture and engineering. He is also known locally as a founding partner of Seaspice restaurant on the Miami River.

They are working alongside internationally awarded recording artist, Chiōma Èzé, who has secured sponsorship for the event through her own organization, Unimpossible Inc.. Additional support for the livestream event has been provided by Studio Miami in conjunction with Entourage Entertainment to bring the event to life.

One of the most prolific artists in reggaeton and Latin rap, Nicky Jam is a charting, award-winning singer and songwriter who has collaborated with a long list of performers, including superstars such as Daddy Yankee, Farruko, J Balvin, and dozens of others in addition to his solo material. He has received a number of accolades including the iHeartRadio Corazón Latino Award, which honored him for all of his contributions and philanthropic efforts to the Latinx community, and Premios Tu Música Urbano Special Achievement Award, which recognized him for his impressive career as one of the early pioneers of reggaeton, leading to his current success as an influential multi-platinum, crossover artist who has paved the way for a new generation of artists. Jam has earned countless nominations and awards, including most notably the Billboard Latin Music Awards Latin Rhythm Song of the Year, iHeartRadio Music Awards Latin Song of the Year, and Latin Grammys Best Urban Performance and Album of the Year.

Next Breaking The Secret Fashion Color Code Across Eras and Cultures