“A STORY OF INTENSE TIMES”

There was a time when it was decided to turn to otherworldly forces. There was a need to intercede, with persuasive, incisive and decisive means, all the way to the highest possible point. The survival of the species was at stake: the human race was threatened by an unknown and untreatable disease.

In Barumini, in the Province of South Sardinia, stood the palace of Su Nuraxi. He seemed to have welcomed all those pilgrims, who would have enough courage and determination, yet reverence and reasoning, to ask the divinity Nuraxamanna for grace.

Nuraxamanna used to be the queen of Su Nuraxi, but evolved in a mythical character. She was beautiful and eternally young. And in addition, she had an enchanting voice that made anyone shiver. Listening to her was a true privilege.

The queen would wear precious fabrics that her faithful fairies quilted with gold and silver threads. These were precious, shiny, printed, velvety, jacquard fabrics.

All around Sardinia, there lived the Janas, the magical fairies. A group of them were known as Tanittas, because they were followers of the Goddess Tanit. The vast majority of Tanittas adored roses, checked fabrics, warm sweaters and strong colours such as black and red, yellow and green. They were font of sequins, tulle, feathers, embroideries and rhinestones.

They had the spirit of the magpie and of those butterflies that alight on the most beautiful flowers. They loved unusual shapes and multifaceted volumes. They were very feminine but loved to dress like men. Each of them had its own style, but some of them, stood out for their ability to mix and combine with passion and nonchalance. Their style was slightly retro but not nostalgic, interpreted with character and vigour, through saturated colours and vivid floral prints, volumes that were tight at the waistline but amble and fluttering all around it.

The castle has always been a pilgrimage destination for all those who needed help, but this time the spread of the disease gathered people all around the world. From the freezing and inhospitable north, to the boiling and disrupted equator; they reached then from the east where the sun rises first, up to the far west, everywhere, in an area where the sun never sets, everybody was experiencing the same tragedy. They moved in a multitude, as the call spread in the neighboring territories up to the most distant lands thanks to the intervention of the Janas, who had taken to heart the salvation of the known world: the fairies whizzed into the sky reaching the borders of the Empire bringing hope to all those who had lost it.

Everyone brought gifts to Su Nuraxi. Bronze figurines honoring their ancestors, baskets loaded with all good things, carpets, tapestries, cowbells each with its unique and unrepeatable sound, woven nests symbolizing home: the most valuable asset along with books. Everybody truly everybody believed in Su Nuraxi and its Queen. The pilgrimage would be the saving, that was sure!

The project – The nuragic complex of Barumini

To present his new collection, Antonio Marras focuses once more on territoriality and this time not only drawing his inspiration from the Sardinian tradition, but focusing the spotlight on a site that the whole world should know, unique, majestic, prehistoric, fascinating, of immeasurable value: so let’s talk about Barumini.

A message as simple as it is powerful: a unique and unrepeatable Sardinia. Sardinia like Easter Island, like Machu Picchu, Stone Age or Angkor Wat.

A fashion show, a short movie, a video with an almost entirely Sardinian cast and crew, with the purpose of proving that Sardinia can compete, realizing events with local resources worthy of the great shows in Milan, Paris and New York.

The complex at Barumini is one of the 55 UNESCO World Heritage Sites that can be found in Italy. According to UNESCO, this extremely valuable and important archaeological site is exemplary for being the most complete and best-preserved of the remains left by the Nuragic Civilization; at the same time, it also demonstrates the intelligent use of innovative materials and techniques by a prehistoric community.

The Village of Barumini – with its innumerable testimonies of a society that lasted for over a thousand years – indicate that this territory was inhabited over an immensely-long period of time: from the Bronze Age until the Third Century A.D.

For all these reasons Barumini is the best representation of Sardinia’s great stone monuments: a suggestive and mysterious place to visit.

ANTONIO MARRAS to Show Women and Mens Collections Together 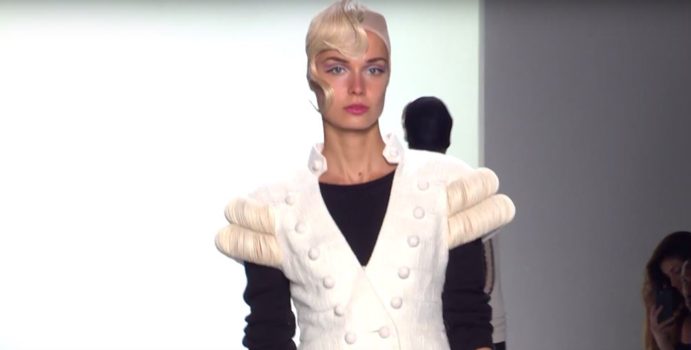