Alexander McQueen and Christie’s are pleased to announce that three new pairs of Armadillo Boots will be auctioned at the Christie’s Handbags & Accessories Auction from July 14th – 23rd in support of UNICEF’s relief efforts in Nepal.

The Armadillo Boots are one of the most iconic footwear designed by Lee Alexander McQueen and three pairs have been remade especially to raise funds for the charity.

The Armadillo Boots first appeared on the Spring/Summer 2010 ‘Plato’s Atlantis’ show and gained instant attention for their unconventional and striking design. Because of their unique and complex construction, they were never produced so only 21 pairs of these shoes from the show are in existence. Several examples of them are currently on display in the Savage Beauty exhibition at the Victoria and Albert Museum in London, a retrospective of Alexander McQueen’s work.

Christened the ‘Armadillo’ due to their form and armour-like appearance, the boots morph from the leg to give the illusion of a ballerina standing on point. Other-wordly and futuristic, the exaggerated silhouette is deemed a work of art.

These three new pairs of Armadillo Boots have been handcrafted in Italy from wood and python skin and are a genuine and rare collector’s item.
100% of the net amount from the auction sale of these lots are intended to be donated by Alexander McQueen to the U.S. Fund for UNICEF to support the Nepal relief efforts.

Chloe x Halle Celebrate that Change is Made with Code 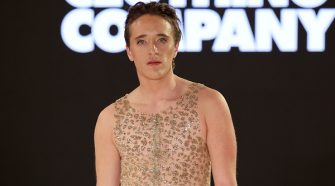