Since her first album with Destiny’s child, Beyoncé has taken the world by storm. Where the media is concerned, she tends to let her work speak for itself while maintaining the veil of mystery and inaccessibility enthralling us further in her charms. Her album Beyoncé that was released in 2013 had us dancing to hits like “Partition” and “Drunk in Love”. As we close the year 2016, let’s look at Queen Bey’s highlights over this crazy year.

In February, she surprised us with the release of “Formation” only to perform it for television’s largest audience the very next day. Both the video and her Super Bowl performance were a subject of controversy for some time. Both the images of a submerged police car and the phrase “Stop shooting us” spray-painted on a wall in her video as well as the Black Panther- reminiscent costumes her dancers sported at the performance were a killer-combination that fanned the flames. Police unions were outraged, calling for protests, but Beyoncé held fast. She defended her art saying she was not anti-police, but that she was definitely anti-police brutality and that the two were separate things.

March brought the debut of her clothing line, Ivy Park, a collaboration with Topshop. The line features athletic wear meant to inspire women who understand that beauty is more about physical appearance to push for their goals. The line was officially available worldwide on April 14th.

In April, she slayed HBO with her visual album Lemonade, and simultaneously raised eyebrows on possible issues in her marriage to Jay Z. Just days after the HBO release, she kicked off the worldwide Formation tour in Miami. During the tour, she gave her fans the opportunity to donate to the residents of Flint, raising over $82,000 for the victims.

In July, Queen Bey surpassed Madonna in the most VMA wins, collecting six more Moonmen for a total of 22. Her medley performance of songs from Lemonade was a sixteen minute rampage including smashing a camera with with a baseball bat and stomping her bootheels in the broken glass. Intense pyrotechnics flared while she sang lines like, “better call Becky with the good hair” and “you ain’t married to no average b****, Boy” and only fanned the flames of speculation regarding rumors of adultery.

In November, Beyoncé performed her song “Daddy Lessons” with the Dixie Chicks at the CMA Awards. Critics praised the performance, calling it a cultural inspiration, but online viewers raged. Comments online seethed with hate and racism saying Beyoncé had no business being at the Awards show being that she was not a Country artist. Others disapproved because of the controversy concerning police brutality and her political views.

December 6th brought nine Grammy nominations to add to her previous 53 nominations. If she is awarded just eight of them in February, she’ll break another record for most female Grammy wins. In this year, Beyoncé has broken records, spoken out against injustice, advocated feminism and positive body-image, smashed the competition (among other things), and continues to change the game. Let’s hope 2017 brings just as many surprises from Queen Bey.

Opera Italiana is in the Air at Regatta Park 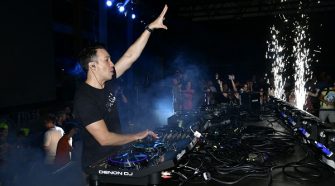